OCAT Shanghai is proud to present the group show Degeneration.

This exhibition explores the concept of continuity and rupture in Contemporary Art, through the works of the ten most representative young artists working with different media in Mainland China.

There seems to be now a certain tension between the reluctance to move away from the legacy transmitted by the former generations and the objective necessity to break this thread: is precisely this the way a new generation arises.

What we would like to suggest or imagine is a scenario in which there would be no more need to refer back to the formal authority of the preceding generations, yet their irreverent spirit could be maintained.

The word “degeneration” implies several meanings. The literal one is “deviation from one’s own genus”, referring to a process that cannot be stopped, an altered status which makes impossible to go back to the starting point, or even to an intermediary one. Not necessarily utterly bad, this is a condition contemporary societies – including the Chinese one – are now confronted with. The other temporary meaning conferred on the word in this context derives from its split into two separate parts – “de” and “generation”: the prefix “de” is used to indicate (de)privation of something, which in this case is the “generation” itself.

As a process, “degeneration” embeds the symptom and the cure.

One of the most remarkable aspects of this exhibition, which follows a plethora of shows addressing the generational issue, is that it is made of ten small “solos” encapsulated in it: one for each of the participating artists. This is aimed at forming a coherent path that may indicate their evolution and possible future directions, showing that not necessarily a young artist is inexperienced (on the other side the work of more mature artists not necessarily loses its freshness in time). While fighting against the many clichés about young artists, we will therefore try to detect new possible meanings for the adjective “young.”

Degeneration is not only and not simply about “monsters”, although the works by Lu Yang, Chen Zhou, Li Ming and Ye Linghan materialize absurd and uncanny atmospheres.

It is about pushing a language to the limit, exploring the possibility to reenact and reproduce reality according to one’s own personal criteria: this could be done by altering the content of well-know films and video works, or simply by re-evoking their atmospheres, with the implicit critical re-evaluation of models (Cheng Ran); by constructing a sophisticated – yet immediate – photographic image, taken from an un-known story from a parallel dimension, which is always that of the mind (Chen Wei). It’s about the aberrations and derangements of the senses, how we experience and form knowledge in the era of the fast-everything (Guan Xiao); but also about how, throughout history and memories – those of our “fathers” – we shape our idea of the world (Li Ran and Hu Yun). Finally, it’s about how we let dreams get stained without giving them up, how we fight against the evil we perceive, and how we engage our minds and bodies in this struggle (Ma Qiusha). 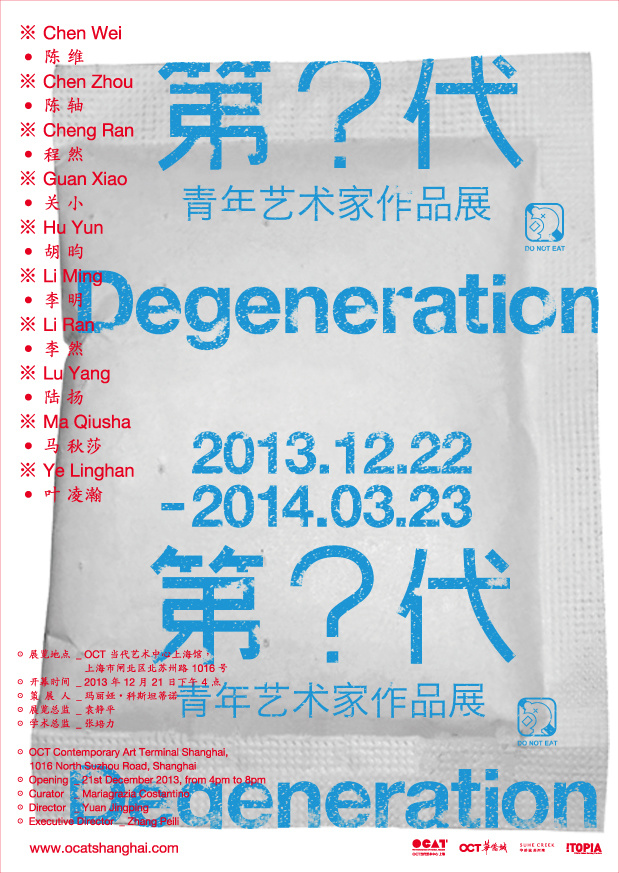