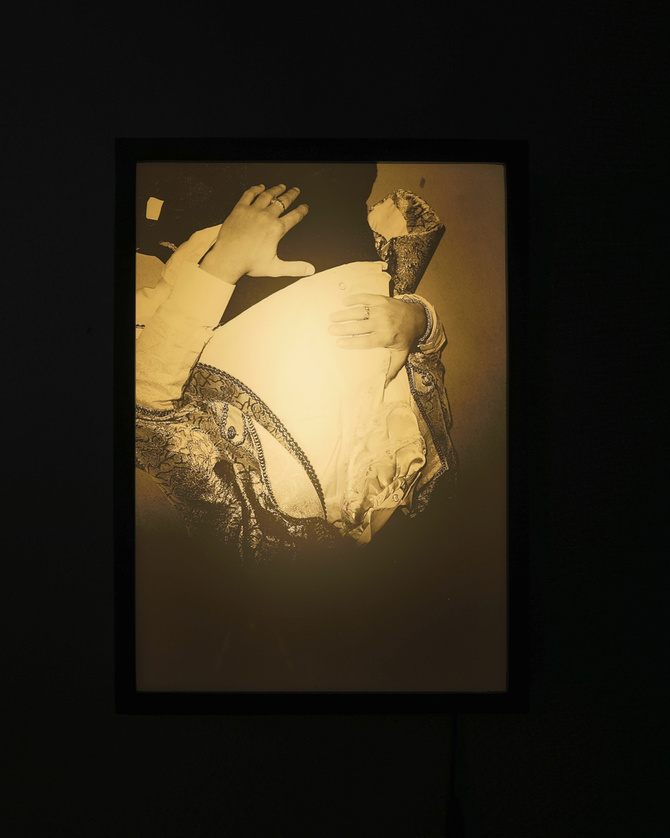 The Grand Voyage: A Man Upside Down

August 20 to November 20, 2016. The exhibition will take the audience into the mesmerizing vertigo space of “a man upside down” unveiled through multi-channel videos and mechanical installations. This exhibition is made possible by New Century Art Foundation.

In the summer of 2014, supported by Imagokinetics, GUO Xi and ZHANG Jianling began a long-term collaboration The Grand Voyage: A Man Upside Down which unfolded in an 86 days world cruise on "Costa Atlantica" from March to May, 2015. Before departure, they wrote and released twelve prophecies that will happen along the route, the stories not only reflect potential routes to the theme but also serve as an index leading to infinite texts and endless interpretations. From March to May, tracing the sensory experience and mysterious disappearance of Bas Jan Ader and Arthur Cravan, their journey searched for vanished gazes and solitary figures that once reached out to tangible infinity then disappeared in the ocean. As witnesses, the artists brought back to the continent visual testimonies that they collected along the way.

Since 2014, the unfolding of The Grand Voyage stems from a literary approach, that tested the waters at various venues such as, the 80 WSE Space in New York, Chronus Art Center (online project), Shanghai Shanghart Gallery, Shanghai Rockbund Art Museum, Hanart T.Z. Art Gallery and etc. At these different exhibition spaces, the artists gradually unveiled the labyrinth-esque narrative in presenting the “constellation” among texts, images and objects unpacked through the stories of one thousand characters and their respective parcels. The various exhibition sites are comparable to the chapters in a travel novel, where fragments of the countless pieces of scenarios, figures, artworks are dispersed, may be identified by the naked eye; at the same time, the artists have embedded various invisible clues in each exhibition and among themselves, building liaison between the works of art and the exhibition, allowing them to reflect and resonate with each other. In which, the characters are the evidence and ramification of their predictions, manifested through various incarnations, in particular, “obsessions” have came forth as one of the embedded clues. These invisible clues connect the dots among the stars scattered in a “constellation” that produces meaning. The exhibition welcomes the viewers to embark on a game of puzzles through their experience of the works of art, and through their arbitrary guesses, part of the hidden clues may be revealed for future exhibitions.

The Grand Voyage is supported by Imagokinetics, special thanks also go to Costa Atlantica.

1. Furniture move with the ocean waves in his cabin, sliding attentively and crashing violently in the three meters long video projection.

2. He lost consciousness next to different furniture then woke up leaning on different wooden legs, uncertain of his position in the space of two meters long video projection.

3. An armchair is approaching super typhoon “Dolphin”; a red curly hair is quivering in the cushion woven with orange and brown fiber.

4. A transparent wine bottle adorned with blue English letters is lit up by a beam of a mini projector.

5. In his telephone recording with the night shift telephone operator every time he was drunk, he repeatedly emphasized his fascination with dizziness, until both of them came up with an unconventional story.

6. A black and white photograph is the only historical record, according to reports from that time, the deflected light transformed from deep blue, golden yellow, and eventually culminated in brilliant creamy white. 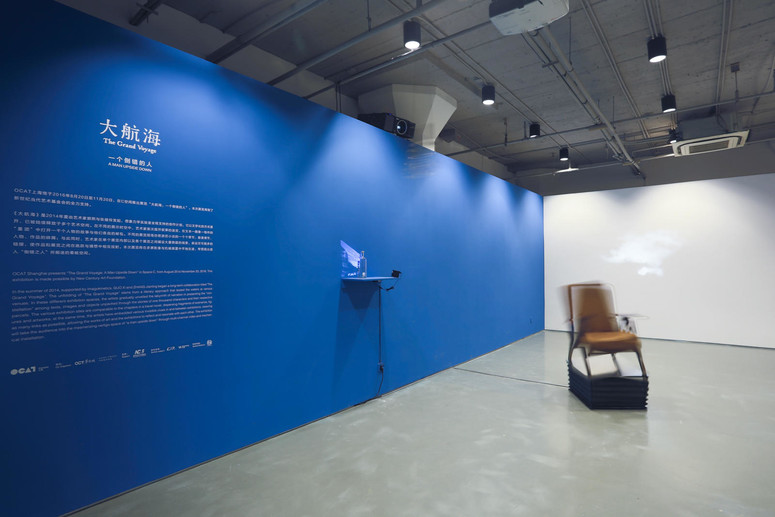 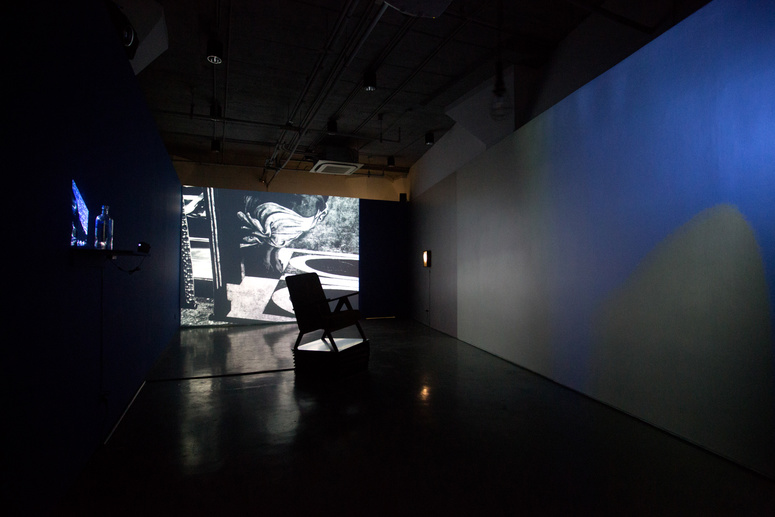 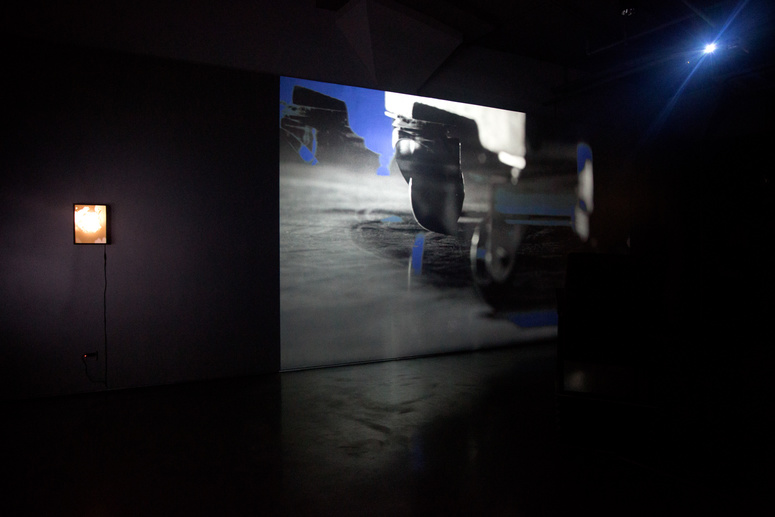 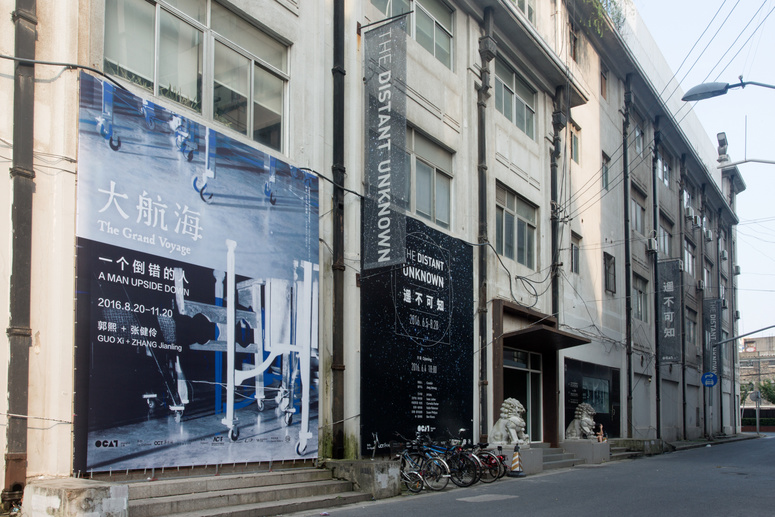 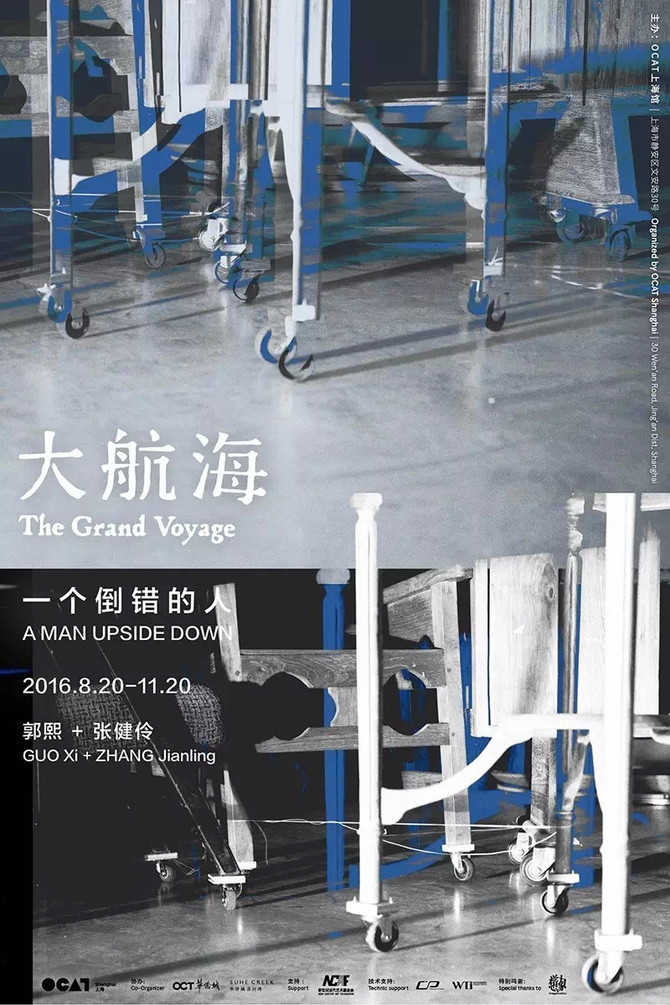